The Best Things to do in Luxor 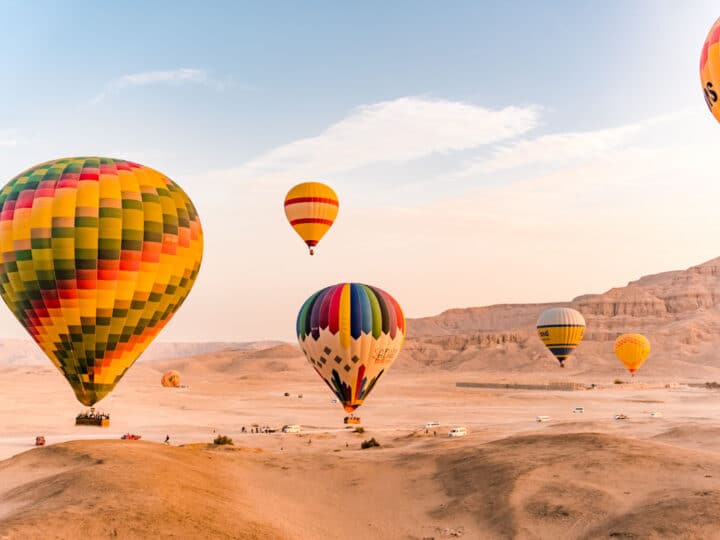 Looking for the best things to do in Luxor? Look no further – this in-depth guide walks you through the places you shouldn’t miss on your trip to Egypt’s iconic destination.

Luxor. Sure Cairo has The Pyramids and Aswan has Philae, but Luxor seemingly has it all.

There’s the Valley of the Kings – forever entwined with the stories of pharaohs past like Tutankhamun – not to mention the vast temple complex that is Karnak.

All before you throw in stunning destinations such as The Mortuary Temple of Hatshepsut and Luxor Temple. Like I said, Luxor has it all.

It was the destination I was most excited about visiting on my recent Egypt trip and *spoiler alert* it didn’t disappoint.

How could it really? This living portal to the ancient world where the tales of past millennia are writ in golden stone.

Are you ready to take a trip back in time and discover the treasures of the ancient world?

Come along with me as we explore the top things to do in Luxor.

Tip:  Book a stay at the Hilton Luxor Resort & Spa for the ultimate luxurious trip.

Top 5 Things to Do in Luxor

Marvel at The Valley of The Kings

First up – The Valley of The Kings.

If there’s only room for one place on your Luxor itinerary (and it would be a mighty shame if that were the case), it should be this bucket list destination.

Hidden away in between the rocky mountains of Luxor’s West Bank, The Valley of the Kings served as the final resting place for Egypt’s royals for over 500 years starting with Thutmose I to Ramses X.

There are 63 tombs in total, though only a fraction are open to the public and an even smaller number included in the general entry ticket – but what a collection.

Hieroglyphs carved into stone walls, colourful depictions of the afterlife telling the story of the Egyptians’ beliefs, illuminated by shafts of daylight from the outside world.

Don’t miss the most notable of them all—Tutankhamun’s tomb.

No visit to the Valley of the Kings would not be complete without seeing the famous boy king’s tomb. Even though it’s quite small, it’s the only one with a mummy inside and it’s well worth paying a bit extra to see it.

As a whole The Valley of the Kings is a tremendous place to start your adventure in Luxor. The tombs have survived floods, raids from thieves, and even mass tourism. Somehow they are still standing today, providing insight into the burial rituals of Egypt’s leaders.

Expect to see the finest displays of craftsmanship, stone masonry and art as you walk around and take in the grandeur of the tombs.

While the sights of Luxor are impressive from the ground, they’re even greater once you view them from the air.

Imagine this: you hop into a balloon, rising serenely as the sun’s first rays reach out to bathe the valley and its surrounds in a pool of gold. Sounds amazing right? It is.

Wanna have a little peek at the experience? Go on then…

If you’re willing to get out of bed early, you’ll experience the best views of the Nile River as the sun starts to light up the area. As you continue to ascend, you’ll get to see all of Luxor’s incredible sites and monuments spread out in a multicoloured patchwork below.

Venture to the end of the Theban hillside to discover another iconic Luxor attraction —The Valley of the Queens.

Similar to the Valley of the Kings, this site has about 90 tombs clustered into its cliffsides. Most of the tombs were only discovered in the early 20th-century.

The most notable tomb in the valley is the tomb of Queen Nefertari, the first wife of Rameses II. It is the most beautiful tomb in the valley and an absolute must. You’ll pay a hefty extra fee of 1200 EGP to see the tomb itself, but this is too magnificent a sight to be missed.

Nefertari’s name means “beautiful companion”, and she was Rameses II’s favourite wife. It’s little wonder then that the king spared no expense to build the grandest tomb for his beloved queen.

Stand in Awe at Karnak Temple

Of all of Luxor’s temples, Karnak is by far the greatest. This large temple complex comprises sanctuaries, stone pillars, and pylons that were mainly dedicated to the Theban Triad.

It was built over a period of 1,000 years – a continuous effort of successive pharaohs, each of whom left their stamp on the complex. Quite fitting for the greatest religious site during the rule of the New Kingdom.

At the entrance of the temple you’ll also find the start of the Avenue of Sphinxes, which once linked Karnak with the Luxor Temple. Once inside you’ll find the Great Temple of Amun, and a number of smaller temples, as well as the jaw-dropping Hypostyle Hall.

Luxor Museum is another of the city’s must-visit sights. This museum tells the story of Luxor from ancient times, when the city was still known as Thebes, up until today.

There are multiple museums that showcase various statues, and artefacts such as amulets, jewellery, and tomb furnishings. One of the museum’s prized possessions worth checking out is the re-erected Wall of Akhenaten.

The wall consists of 283 blocks of sandstone covered in painted reliefs which belonged to the Akenhaten’s Temple of the Sun at Karnak.

The ground floor of the museum is perhaps its most impressive, as it has several artefacts including the lifestone relief of Tuthmosis III. It also has an intricately carved statue of the pharaoh, which came from Karnak.

Brilliant Things to See & Do in Luxor During the Day

Embedded into the cliffs of the Theban Necropolis sits one of the most stunning temples in all of Egypt – the Mortuary Temple of Hatshepsut.

The temple rises 300 metres into the hill and blends in seamlessly with its surroundings. Hathshepsut designed the temple herself shortly after she came into power. She designed it to be grand and to tell her life story and accomplishments.

Over the years the temple sustained some significant damage and vandalism. Rediscovered in the late 1800s, restoration efforts have luckily brought it back to its former glory

If you’re looking for things to do in Luxor in one day then I would highly suggest a visit to Luxor Temple. The temple is a custodian of Egyptian history. Once you’re here, you’ll get to see why Egypt was one of the most powerful nations of the ancient world.

The temple is the ultimate time capsule. It sits in the heart of downtown Luxor, but once you step foot on the temple grounds you’ll forget that you were ever in a modern city.

The temple is the symbol of the rule of the New Kingdom pharaohs, mainly built by Amenhotep III and Rameses II. Over the centuries many pharaohs have left their mark on the temple, creating it into what it is today.

As you step onto the Luxor Temple grounds, you’re greeted by the Avenue of Sphinxes and a number of tall statues depicting Egyptian rulers. Beyond the temple gates you’ll find many courtyards such as the Great Court of Rameses II and the Sun Court of Amenhotep III.

You’ll also find the Mosque of Abu Al Haggag, the Sanctuary of Amenhotep and many shrines.

If you’re looking to spend the day away from Luxor, consider taking a day trip to the small town of Kom Ombo. It is about three hours away from Luxor and only 50 minutes away from Aswan along the Nile.

It is best-known for the Kom Ombo Temple, a magnificent temple complex dedicated to the twin deities Sobek and Haroeris. The temple is one of the finest examples of Ptolemaic temples in Egypt.

Its walls and stone pillars are intricately decorated with inscriptions and images. The entrance alone will leave you dumbstruck, as it’s particularly large and grand.

The Colossi of Memnon are usually the first things you see when arriving at the West Bank. The two faceless statues are quite something to behold as they rise 18 metres into the air.

They represented Amenhotep III and his great power. During the Roman occupation of Egypt the statues became quite a tourist attraction, as the Romans renamed the statue in honour of king Memnon killed in the Trojan War.

While both statues have sustained some damage over the centuries, they are an incredible indication of the ancient Egyptians’ power, artistry, and strength.

Another city worth visiting on a day trip from Luxor is Edfu. It sits on the west bank of the Nile River between Aswan and Esna. It is famous for being the Temple of Horus, the son of Isis and Osiris.

The temple is over 2,000 years old, built during the Ptolemaic Dynasty. It is one of the best preserved temples in Egypt, with much of its structure largely unchanged since it was first built.

The temple has thousands of inscriptions of Horus and how he went about creating a new cult that worshipped falcons. It is a relatively young temple compared to some others in Egypt, and is worth visiting as it gives great insight into the Plotemaic rule.

Cool Things to See & Do in Luxor at Night

If you thought that the Karnak Temple was impressive during the day, just wait until dark to see how magnificent it really is.

Karnak is one of the few temples in Egypt that offers a sound and light show in the evening. You can walk through the temple and watch as it lights up while learning about the great leaders of Egypt and their accomplishments.

Egypt is famous for its incredibly flavourful cuisine, as well as the Nile River. So what better way is there to experience them both than with a Nile dinner cruise?

You’ll be able to enjoy a fantastic evening out on the tranquil waters of the Nile while feasting on some of the best Egyptian dishes. Plus there’s great entertainment, including belly dancing and Nubian folk shows.

It’s definitely one of the most romantic things to do in Luxor at night.

Everyone knows Luxor for having bustling bazaars and markets where you can pick up a range of items to remember your time here. Many shops close late at night, so if you want to beat the heat and actually enjoy your shopping experience, then it’s best to go after sunset.

Top Things to Do in Luxor: Practical Tips for Your Trip

Here are some top tips to help you make the most out of your trip to Luxor.

How Long Should You Visit Luxor?

You need at least three days to experience all of Luxor’s main sites.

The best time to visit Luxor is from March to April, and October to November. This is when temperatures are moderate, crowds are smaller, and when you can save big on accommodation and flights

Where Should I Stay in Luxor?

El Mesala is a charming hotel on the West Bank of Luxor. It has stunning views across the Nile and the Luxor Temple. It is near to some of Luxor’s top attractions such as the Valley of the Kings. They provide comfortable rooms with balconies and views of the nile.

Check Rates and Availability for El Mesala on Booking.com

The Steigenberger Nile Palace is an award winning hotel in the heart of Luxor. It is near the shopping district and only 1 kilometre away from the Luxor Temple. It offers luxurious rooms and a variety of restaurants serving Egyptian and international cuisine.

Check Rates and Availability for Steigenberger Nile Palace on Booking.com

Things to Do in Luxor: Map

Previous
A Weekend in Washington D.C: The Perfect Washington Weekend Itinerary (Written by a Local) 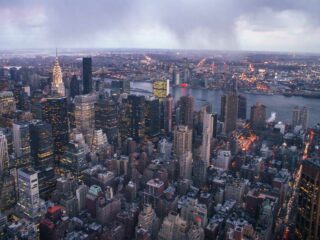 Next
2 Days in New York: A Brilliant New York Itinerary