Visiting The Temples of Abu Simbel: A Practical Guide 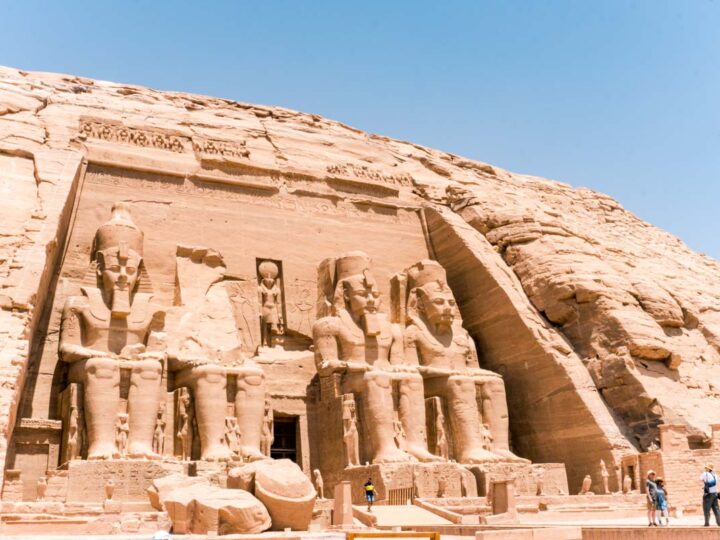 The temples of Abu Simbel are some of Egypt’s best-known landmarks. Discover their history and plan your visit with this practical guide.

Welcome to the land of the pharaohs – where ancient rulers erected momentous structures honouring themselves and various gods. Few of these temples are as grand as the ones at Abu Simbel.

Abu Simbel is one helluva sight. It might have been the place I was most excited about visiting during my most recent trip to Egypt and it did not disappoint.

The not-so-humble structure of Abu Simbel’s Great Temple stands 30 metres (98 feet) high, carved into the mountainside, emblazoned with the likeness of their maker Ramses II (or Ramses the Great).

Next to it, a smaller but equally impressive temple stands, dedicated to Ramses’ much-loved main wife, Nefertari.

Together, they’re a UNESCO World Heritage Site in what used to be Ancient Nubia – not to mention one of the most spectacular structures you will ever lay eyes on.

Are you excited? You should be – it’s time to explore the history of and plan your visit to Abu Simbel.

PS: This Abu Simbel tour with an Egyptologist guide is perfect for history and archaeology buffs who love to learn more about Egypt’s long history.

Why Visit Abu Simbel… And What to Expect When You Do

Why visit Abu Simbel? How about to see one of the greatest pieces of Ancient Egyptian architecture still standing?

Along with The Pyramids in Cairo and Karnak and The Valley of the Kings in Luxor, Abu Simbel is one of the country’s best-known spots and I absolutely recommend adding it to your Egypt travel itinerary.

Abu Simbel is made up of two magnificent temples. You’ll find these temples carved from sandstone on the south side of Egypt next to the gargantuan Lake Nasser. It is just over a three-hour drive or a 45-minute flight from Aswan.

Descending the path from the visitor’s entrance, you turn around the corner, catching first a glimpse of the Great Temple, until it reveals itself in its full glory.

Ramses dedicated this temple to the gods Ra-Horakty, Ptah, and Amun, and to himself (of course) – because if there’s one thing that Ramses II did well, it was to crow about his own great deeds.

It overlooks the Aswan high dam, which has caused quite some trouble in the past (read more about that below).

The inside is equally grand. The temples are as much a tribute to the gods as to Ramses and his victories.

Inside, you’ll find three successive halls (the Hypostyle Hall, Vestibule and Inner Sanctuary) with more statues of the Pharaoh, sanctuaries and hieroglyphs.

Each one is smaller than its predecessor – in the first there are elaborate depictions of Ramses’ victory at the Battle of Kadesh – the story forever frozen in sandstone.

The inner sanctuary sits in the temple’s most revered spot – deep inside Abu Simbel. It  contains statues of four gods (one of whom is Ramses) – three of the living world – Ramses, Ra-Horakhty and Amun Ra and one of the underworld – Ptah.

In addition to the Great Temple, there’s a second smaller temple – often referred to as the Small Temple – dedicated to the pharaoh’s favourite wife Queen Nefertari and the goddess Hathor.

Similar to the Great Temple, there are also a few statues of the Queen guarding its doors and facade, although there are actually more of Ramses himself (look, Egyptologists didn’t name Ramses II “the great chiseller”  for nothing you know).

Inside, the walls are covered with intricate carvings depicting scenes from everyday life. The Hypostyle Hall – just inside the entrance to the temple – contains columns decorated with Hathor’s face.

Delve deeper inside to the Vestibule to see more carvings before venturing to the Inner Sanctuary where the pharaoh and his queen make offerings to the gods.

Note: If you can, book with a tour guide who can help you soak in all of the history and ancient Egyptian culture inside these temples.

Each year, the sun festival takes place at Abu Simbel on the 22nd of February and the 22nd of October.

During the festival, the sun lights up the normally dark Inner Sanctuary of the Great Temple – bathing three of the gods – those of the living world – in light, while Ptah, the god of the underworld remains shrouded in darkness.

To get the full effect, you need to arrive before sunrise and then stand in crowds as you watch the sunrise hit the temple chambers.

After the event, there’s traditional dancing and stalls loaded with koshari (one of Egypt’s most loved dishes) along with lots of music to celebrate.

The History of Abu Simbel

The Pharaoh Who Built Abu Simbel

The pharaoh who built Abu Simbel was Ramses II. Builders completed the structure in the 13th century, and it took over 20 years to construct. It stands towering over its people, carved on the side of a sandstone mountain.

He sits 66 feet (20 metres) tall with his children carved sitting at his feet. His favourite wife, Nefertari, and his mother, Muttuy, also join him.

The second temple sits about 328 feet (100-metres) away from the Great Temple. It is a little smaller and honours Nefertari and the goddess of love and music—Hathor. Inside there are beautifully decorated walls in a hypostyle hall, vestibule, and inner sanctuary.

While the temples were finished by the 13th century, they sat undiscovered by modern civilisations until 1813. In 1817, a brave Egyptologist, Giovanni Battista Belzoni, was the first to explore the monument.

In 1960, near tragedy struck when the ancient temple almost got flooded by the Egyptian government’s plan to build the Aswan High Dam. This dam on the Nile proved to be very helpful for the local people as it provided them with irrigation and hydroelectricity.

To save this mighty tribute, UNESCO and the Egyptian government worked together to relocate the two temples. It was no small feat and took four years and $40 US Dollars to do. This project required them to cut each temple into smaller blocks and reassemble it like a jigsaw 200 feet (60 metres) higher than its previous home.

I’d say the many scientists, engineers, mathematicians, and other handymen worked hard to relocate the temple. Especially considering that they had to position it just right so the sun shines only twice a year.

Why Is There a Sun Festival?

The Sun Festival is significant as it represents the day Ramses II was born and the day he ascended the throne. During these days, as the sun rises, it illuminates the three gods in the temple through the entranceway.

These are the god of the sun (Ra), the king of the gods (Ammon) and Ramses II, as he was a pharaoh and considered himself a god. The only god not illuminated is Ptah—the God of Darkness.

This means Ptah has remained in darkness for over 3,200 years.

Planning Your Visit to the Abu Simbel Temples

Visiting Abu Simbel on a Tour

Hoping to see and learn more on your visit to the temple Abu Simbel? Take these tours for a smooth trip.

While taking a tour may be easier, you don’t have to take one to see the temples. You can reach Aswan’s temples in a few different ways from various points within Egypt but by air or road is the easiest.

There are no railways in the south of Egypt, but you can get to the temples by bus or car. It takes just over three hours to reach Abu Simbel from Aswan, so taking a bus is the easiest option.

There is a public bus that runs between Aswan and Abu Simbel. It runs between 4 am and 5 am once a day. So, you might have to spend the night in an Abu Simbel hotel. Prices vary but expect to pay around £5 ($6) to £27 ($32) per person.

Tip: Check with the bus service beforehand because some aren’t allowed to transport tourists.

The quickest way to reach Abu Simbel is by air. Tickets cost between £50 ($60) to £104 ($125) depending on the day and availability. You can check Skyscanner for flights with Egypt Air’s 45-minute direct flights.

Where to Stay for Abu Simbel

Eskaleh Eco-Lodge is close to the town centre, about 2 km from the Great Temple and 5 km from the nearest airport. The pet-friendly lodge offers a traditional Nubian experience with a restaurant, garden, and waterpark on-site.

Alternatively, check all accommodation in Aswan at Booking.com

Abu Simbel is open Mondays to Sundays from 5 am to 6 pm.

Previous
The Ultimate Travel Bucket List: 100 Things To Do Before You Die

Next
Taking a Nile River Cruise in Egypt: What You Need to Know and Where to Book