Visiting The Mortuary Temple of Hatshepsut in Luxor: A Practical Guide 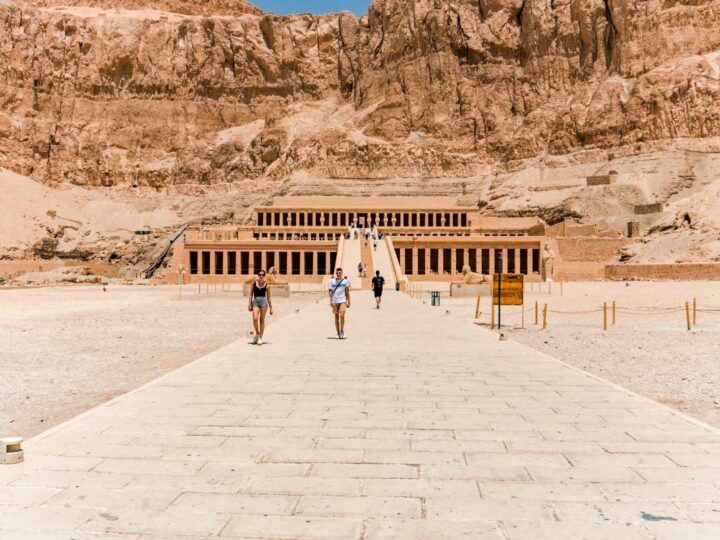 Tucked into the cliffs of Deir el Bahri, the Mortuary Temple of Hatshepsut is one of Luxor’s most striking sights. Here’s what you need to know.

It will come as a surprise to absolutely no-one ever that Luxor is full of stunning historical sites. From the tapestry of tombs that makes up the Valley of the Kings to the grandiose temple complex at Karnak, there’s no shortage of things to see.

Even so, the Mortuary Temple of Hatshepsut will make you pause in wonder.

As one of the most impressive feats of ancient architecture, the temple represents the legacy of one of Egypt’s most prolific rulers and one of the world’s most influential early female leaders.

Sounds like a lot of superlatives, I know, but it more than deserves it. It was one of the sights that really

Simply put, you should add it to the top of your list of must-visit spots in Luxor.

Wanna know more? Discover the history of Hatshepsut’s Mortuary temple and why you shouldn’t miss it.

Why Visit The Mortuary Temple of Hatshepsut?

History enthusiasts, buckle up because we’re about to go on a ride! Even if history isn’t your cuppa tea, there’s plenty else to appreciate at Hatshepsut’s temple – the stunning architecture alone is worth the visit.

Besides being an impressive display of ancient architecture and ingenuity, like all good Ancient Egyptian landmarks, the mortuary temple, or ‘funerary temple’, of Hatshepsut also has a story to tell.

It tells the tales of the successful pharaoh, her impact on Egypt, and how her legacy survived a sustained attempt to erase it.

During her rule, Pharaoh Hatshepsut commissioned hundreds of buildings around the Nile. Sounds pretty par for the course so far – but she also re-established tarnished international relationships, and facilitated trade to create a harmonious Egypt – a feat that very few monarchs achieved.

Cast against the desert backdrop and beneath the Deir el Bahri precipice, the colossal structure appears like a mirage.

Although it’s spectacular in the daylight, as the sun sets, lights illuminate and exaggerate the temple’s already impressive features.

What is Hatshepsut’s Temple, and Why Does it Exist?

Pharaoh Hatshepsut commissioned many buildings. However, this one is easily the most impressive of the lot.

Like the commissions by almost every other Egyptian member of royalty, Hatshepsut’s mortuary temple immortalises her legacy and influence as a ruler of Egypt.

Typically, mortuary temples are a place of worship for the deceased monarch.

At the temple, priests would perform daily rites and present offerings to the monarch’s protecting spirit, who accompanies them in the afterlife.

If you know anything about ancient Egyptians, it’s probably that they took burial and the afterlife very seriously.

That’s why this temple, and most others of its kind, pay tribute to the god of death and resurrection, Osiris.

Mortuary temples also revere the god of the dead and protector of graves, Anubis.

What You’ll See Inside Hatshepsut’s Temple

When you stand before Hatshepsut’s Mortuary Temple, you might agree that, from a distance, it appears to be a minimalist’s dream.

The clean lines and monotone construction seem almost miles ahead of its time. But, as you approach, the massive sandstone sculptures emerge, and the temple’s ancient history quickly comes to life.

Courtyards at The Temple of Queen Hatshepsut

Once, the temple’s stately entrance held even greater glory, lined with sphinxes to guide visitors.

The structure reveals its architectural inspiration as you ascend the temple’s steps and arrive at its courtyards.

The temple’s clean, cuboidal columns are unique to those of other ancient Egyptian constructions. Instead of the typical round pillars mimicking the papyrus reeds, these pillars blend effortlessly into the striations of Deir el Bahri.

Once you make it through the vast courtyards, each roughly the size of two football fields, you’ll find yourself near the entrances of the temple’s chapels.

The funerary temple Hatshepsut commissioned contains chapels or shrines to the gods Anubis and Hathor.

Built toward the back of the temple, there is also a royal worship chamber and a sanctuary for Amun-Ra.

The chapel of Anubis, dedicated to the jackal-headed god of death, embalming, and transition to the afterlife, includes paintings of the god and Hatshepsut.

One painting depicts Anubis on a throne facing eight tiers of offerings, presumably to guide the queen to the afterlife safely.

Although the intricate deptictions have faded a bit with time, they still remain surprisingly vibrant, and one can easily imagine the spectacular artwork in its full glory.

Perhaps the most symbolic tribute at Pharaoh Hatshepsut’s temple, the chapel of Hathor, is appropriately dedicated to the god of love, music, beauty, fertility, and the protector of women.

The goddess Hathor was also the Deir el-Bahri area’s guardian. If she sounds familiar – she was also the goddess to which Nefertari’s Temple at Abu Simbel was dedicated.

This chapel, at the temple’s south-end, features pillars with the head of Hathor. The goddess has a feminine face, cow ears, and a crown akin to cow horns.

The pillars and walls of this shrine boast sculpted murals depicting cows, the goddess, and the queen.

Hathor’s chapel reveres the area’s guardian and comments on the powerful legacy of the female pharaoh.

“A sanctuary to my father, Amun.” Almost hidden away at the back of the temple is the feature most important to its creator.

The sanctuary of Amun-Ra, the god of the sun and air and who Hatshepsut believed was her spiritual father, has a stunning red granite entrance.

Two paintings at the grand entrance are of Amun-Ra seated on his throne while kings kneel in front of the god.

There are a few chambers within this sanctuary that each pay tribute to gods and deities. One chamber features a large statue of Amun. This is where daily rituals and offerings would take place.

Like many ancient civilisations, and even our ‘civilisation’ today, the sun was significant. This courtyard, known as the Solar Cult Complex, reveres the sun’s diurnal path across the sky.

The large sandstone altar receives the sun’s rays every day. Depictions of Horus, the god of the sky, Amun, and Pharaoh Hatshepsut embellish the complex’s walls.

If the magnificent ancient architecture isn’t enough to convince you, here are some facts about the mortuary temple of Queen Hatshepsut.

I’ve also thrown in a few extra interesting tidbits about the queen – because this temple is as much about her as it is the structure.

When Was the Temple of Hatshepsut Built?

Construction of the temple began around 1479 B.C. It took fifteen years to complete the structure, which is impressive for a project of this magnitude at the time.

How Large Is Hatshepsut’s Temple?

The temple spans almost two hundred and eighty metres in length and reaches about twenty-five metres in height. The structure’s size alone is enough to reflect the Pharaoh’s wealth and power.

Although Hatshepsut commissioned many constructions throughout Egypt, like the four famous obelisks at Karnak, this temple is her magnum opus.

What Happened to the Temple After Hatshepsut’s Death?

After The pharaoh’s death, the throne fell to Thutmose III, Hatshepsut’s stepson.

He did this by ordering the destruction of statues and paintings of the queen and removing her name from cartouches (ancient Egyptian nameplates) at her temple. Thutmose III also removed Queen Hatsheput from the list of official Egyptian rulers.

The Egyptians weren’t alone in this practice. The Romans also practised this punishment. Think of it as the ancient way of ‘being cancelled.’

Scholars still aren’t sure of Thutmose’s motives but many subscribe to the theory that he did not believe the female ruler deserved the title of king. Interestingly, Thutmose destroyed none of the images where Hatshepsut is queen.

After her death, the temple lost its vibrancy for thousands of years.

What Did the Temple Look Like in Ancient Times?

According to Historians, white limestone likely covered the temple, like many other ancient Egyptian constructions such as the Pyramids of Giza.

Where was Hatshepsut Buried?

Although many assume a mortuary temple may include a burial place for the Queen. Hatshepsut’s tomb, KV20, is in The Valley of The Kings.

Historians rumour that Thutmose II built the grave, and Hatshepsut later amended it to include a chamber for herself.

Planning Your Visit to Hatshepsut’s Temple

Visiting the Mortuary Temple of Hatshepsut on a Tour

Tour groups are great fun for all kinds of travellers. They’re a fantastic opportunity to meet like-minded tourists, and an experienced guide often accompanies the tour.

This day trip from Luxor offers the perfect time to appreciate some of the region’s highlights. It includes visiting the Valley of The Kings, Hatshepsut’s temple, the Colossi of Memnon, the Temple of Karnak, lunch, and transport.

Book Your Tour of Luxor Now

If you’re not a fan of tour groups or guided tours and prefer to take your time exploring each historic site, opting for an independent visit is an excellent idea.

Although tour packages usually include the entrance fee, you can purchase tickets at the onsite ticketing office.

Honestly, the easiest way to get to the temple is by taxi. The taxi ride along the Nile and across Luxor Bridge will take around half an hour for a small price of about £6.

Entrance to Hatshepsut’s temple will cost you around £6.20 per person. That works out to EGP140 (Egyptian Pounds).

Where to Stay for Hatshepsut’s Temple

There is an excellent selection of hotels around Luxor. Here’s my favourite stay to enjoy a prime location and a little luxury.

The Sofitel Winter Palace Luxor offers a unique five-star experience in a french-inspired, idyllic hotel. The stunning Victorian architecture is just a few metres away from the area’s highlights, like the Luxor temple.

This accommodation attracts celebrities and royals to its suites and offers flawless French cuisine. The Winter Palace’s pool is the perfect place to cool off after a day of exploring Egypt.

Previous
35 of the Best Things to Do in Asheville 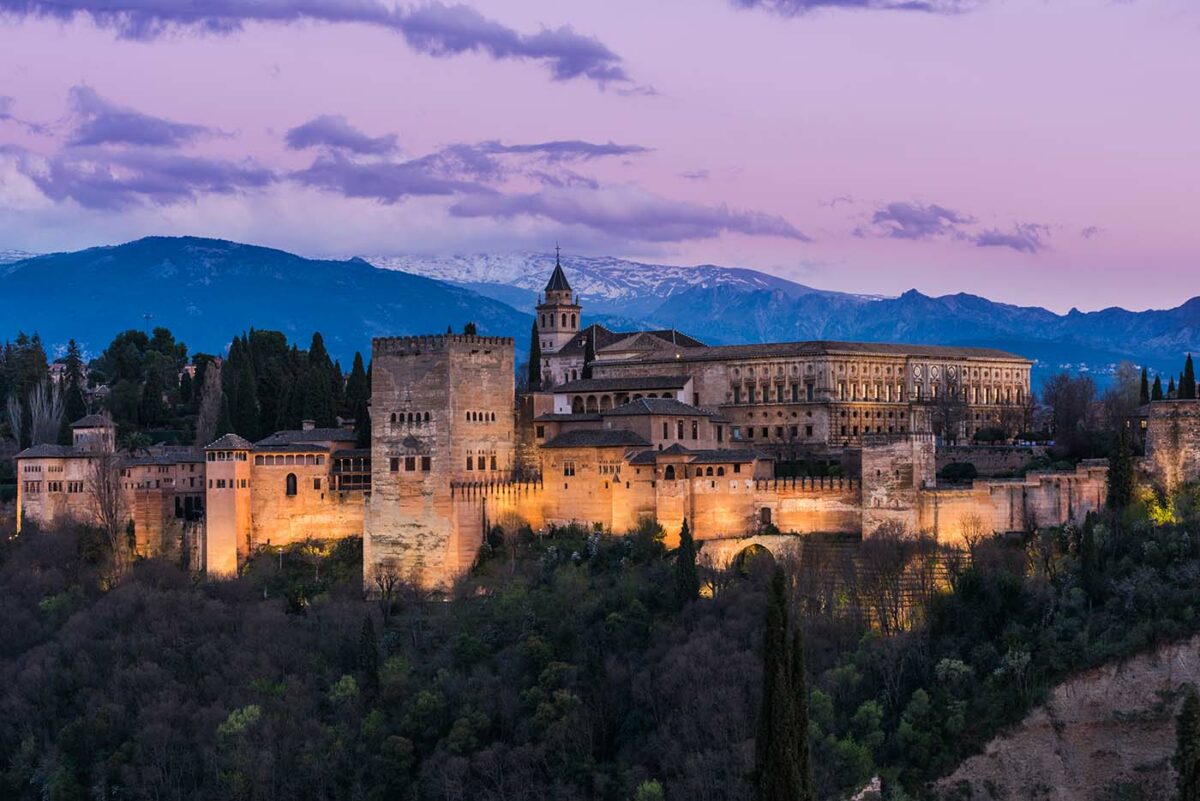 Next
The Perfect Spain Itinerary - 10 Days in Spain