The Best Beaches in the Algarve, Portugal + How to Find Them

Home » Travel » Europe » Portugal Travel Guides » The Best Beaches in the Algarve, Portugal + How to Find Them 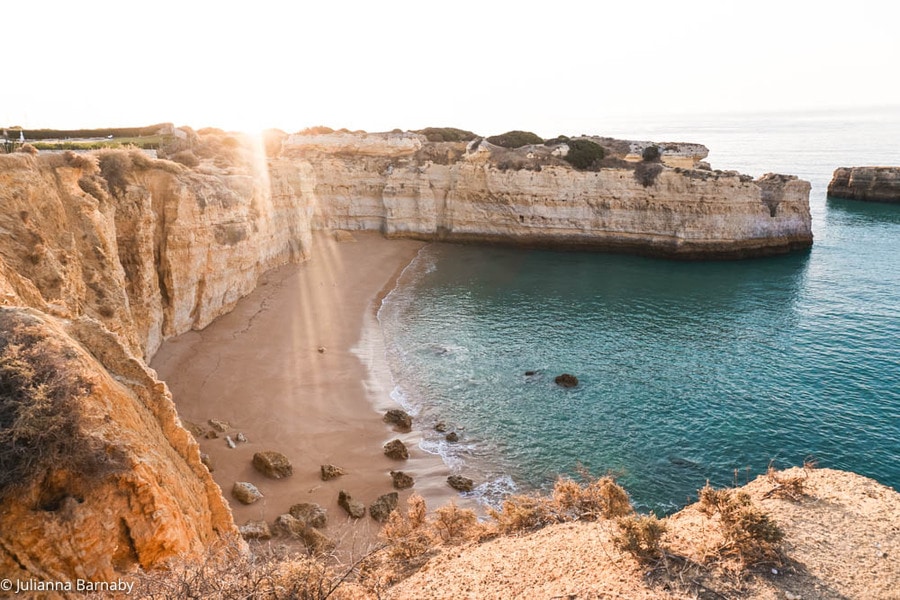 Portugal’s Algarve is blessed with more than its fair share of spectacular beaches. From dramatic spots underneath looming cliffs to miles and miles of sandy shores, these are the best beaches in the Algarve you shouldn’t miss on your trip.

During my first visit to the region, I fell head over heels for the near-unlimited opportunities for beach-hopping – so much so that I always try and slip in a cheeky trip every year to go and discover a few more.

You see, the Algarve’s beaches are nothing short of spectacular: some lead to the limpid waters of the Mediterranean sea, while others onto the raging Atlantic. The result is a diversity of beaches rarely found in one country nevermind in one region.

Looking for the best beaches in the Algarve? I’ve got you covered.

PS: Looking for more Portugal inspiration? Check out my pick of Cool Places to Visit in Portugal and Portugal Itinerary

The Best Beaches in the Algarve

Praia da Coelha is one of the quieter beaches in the Algarve: it’s very unlikely that you’ll need to elbow anyone to find your stretch of sand here.

Perched on the coastline between Albufeira and Armação de Pera, it’s hidden enough that you have to really know its there in order to find it.

That’s a good thing, because once you’ve made your way through the grove to find the stairway leading down to the beach, you’re confronted with a hidden treasure you’ll want to keep all to yourself.

A deserted island? Just a short boat ride away from Faro? Complete with its own 11km stretch of golden sands? I’d forgive you if you thought that the beach at the Ilha Deserta was a heady figment of my imagination. I assure you it is not.

The island is a part of the gorgeous Ria Formosa Natural Park in the area between Faro and Quinta do Lago. All well and good, but it is the beach you’re interested in – and for good reason.

I think this is pretty much my favourite beach in the Algarve and certainly the best beach near Faro, if only because it is so large and wild – and, as you’d expect from a beach that big, it never gets packed, even in high season.

If you do visit, I would recommend hopping on one of the eco-tours that take you on a fascinating ride through the marshlands of the natural park, spotting birds and marine life as you go (we were lucky enough to see dolphins on our last trip).

Once you’re on the island, eco-friendly Estamine Restaurant is one of the best in the region – go if you like your seafood with a side of fantabulous views. Hands down one of the best things you can do in the Algarve.

Search for any recommendations for the best Algarve beaches and I’ll bet that Praia da Marinha features on every. single. one.

Figuring out why isn’t exactly rocket science – ensconced between golden cliffs and crystal clear waters, it looks every inch the part of the dramatic beachside diva it’s reputed to be.

To get to the beach itself, you need to walk around a jutting promontory of rock – do so quickly in high tide or you’re certain to get soaked. Don’t worry though, drying off is just a matter of stripping down to your swimmers, flopping down and enjoying the sunshine – not exactly a hardship.

Praia de Albandeira might not be quite as well-known as its neighbouring Algarve beaches Praia da Marinha and Benagil sea cave but trust me, this is one secret that you will want to be in on.

It might be small, but it punches well above its weight when it comes to natural beauty – so much so that Conde Nast named it as one of the best beaches in Europe.

There are two sides to the beach – the left is bigger than the right, while the right boasts a view of the Arco de Albandeira – a striking natural arch leading from the cliffs into the sea.

Many of the gorgeous beaches on this list are well-known destinations, meaning that when the sun shines, they can get rather busy.

Standing in complete contrast to those popular beaches, the Praia de Vale Figueira is one of the Algarve’s secret gems. Isolated and windswept, it comes with bagfuls of views and a huge swathe of enticing sand.

Be warned, you’ll need to set off on a narrow mud track to get there and there are no facilities in easy reach so be sure to bring plenty with you.

The Benagil Sea Cave’s large domed arch looks too dramatic to be believed – a rocky igloo complete with a small hole at the top through which the sunlight streams in down onto the bathers below.

Go early in the morning, when the cave is near-deserted (it does get very busy as the day progresses), settle down on the beach inside and watch as the cave is bathed in the early morning light.

To access the cave, you can either swim from the nearby Praia de Benagil, hire a kayak or jump onto one of the many boats that hop along that part of the coast.

Or you can do as I did and have to hire a private boat because you’ve flown your drone into the hole at the top, it’s lost GPS signal, gone crazy, crash landed and you have to set off to rescue it. That’s a totally viable option too.

Want to take the adventurous route? Check out this kayaking tour to the caves.

Praia do Barril sits on another island that forms part of the Ria Formosa Natural Park – this time in a section near postcard-perfect Tavira.

It’s famed for the quirky Anchor Cemetery – a collection of old rusting anchors partially-buried in the sand left as a reminder of the area’s once-thriving tuna fishing industry.

Move beyond that and you will find one of the nicest nudist beaches in the Algarve with soft sands and plenty of opportunity for embracing the sun in the buff.

Getting to Praia do Barril is a mini-adventure in itself. You can walk the boardwalk across the marshlands or you can hop on the twee mini train that carries visitors between the main entrance and the beach.

Wind your way down the 200+ wooden stairs that form the passageway to Lagos’ most striking beach – Praia do Camilo. It’s often named as the best beach in the Algarve, so don’t expect it to be at all deserted. With views like these, you can well afford to snuggle up a little closer to your beach neighbour.

Be warned, thanks to the surrounding cliffs, the beach itself is small – if there’s no space or you just want to have a little extra breathing room, head through the tunnel to the quieter beach next door.

Praia de Odeceixe sits right on the cusp of the Algarve, just on the right side of the river that forms the border between the Algarve and it’s much quieter northern neighbour the Alentejo.

Be warned, as this is the Atlantic coastline the waters can get rough and the waves can get big. Hence the popularity with surfers. Like things a little tamer? Simply head to the beach that stretches inland along the river.

I’ve long been a fan of this stretch of the Atlantic coastline as it’s jam-packed with incredible views – the beaches aren’t too shabby either. If you’re up to the challenge, they form a part of the gorgeous Fisherman’s Way on the Rota Vicentina walking route.

Tips for Visiting the Algarve’s Beaches

How to Get to the Algarve, Portugal

The easiest way to get to the Algarve is to fly to Faro, which is served by a broad range of international flights, as well as flights from Lisbon and Porto.

Another alternative is to fly to Seville in Spain and drive over the border. How convenient this is will depend on where you’re going to be based in the Algarve, so check distances before you book.

I’ve stayed in the Algarve quite a few times and these are my favourite places to stay.

While you can get around the Algarve by train and coach, getting to many of these beaches is difficult (nigh on impossible for some) without a car.

Hiring a car and driving in Portugal is easy and gives you the freedom to explore at your own pace (read: getting to the beach at the crack of dawn so you can have it all to yourself).

The Algarve becomes incredibly (some say unbearably) hot during the period between the end of June and mid-September – which also just so happens to be the time when prices are highest.

If you can, travel between late April and mid-June or mid-September to late October when the temperatures are still high enough to sunbathe… without baking you into a brick in the process.

Click here for a map of Algarve beaches featured in this guide.

Previous
Where to Stay in Bruges: The Best Areas + Hotels For Your Trip