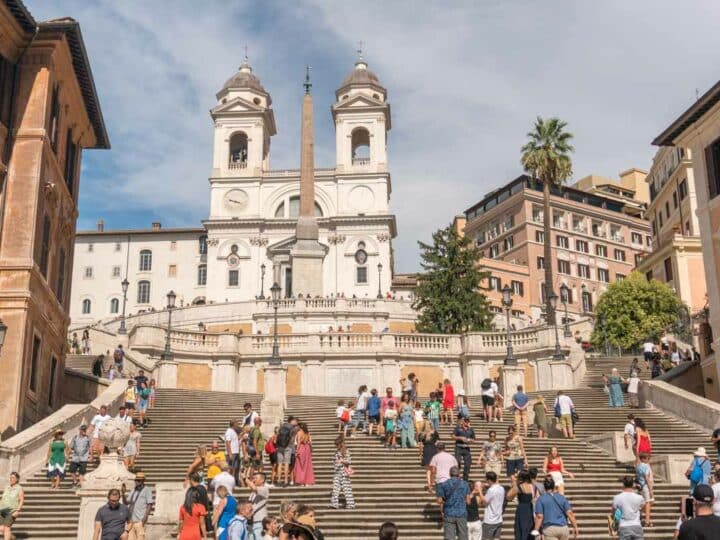 Visiting the Spanish Steps on your next visit to Rome? Here’s everything you need to know before you spot this iconic Roman landmark.

Searching for things to do in Rome? The Spanish Steps are non-negotiable. In fact, I’d argue that they’re one of the most instantly-recognisable landmarks in the Eternal City.

I’ll cover all this, so stick around.

Why Visit the Spanish Steps?

No doubt there will be specific landmarks on your Rome itinerary that you won’t want to miss out on – the Trevi Fountain, the Pantheon, and the Colosseum are all classics. But why visit the Spanish Steps?

Despite the odd name, the Spanish Steps are also a quintessential Roman landmark, with a whopping 138 steps to climb (or not to climb, that is the question).

They’re a fantastic example of the unique architecture the ancient Romans are famous for. Plus, the view of the Piazza di Spagna from above is exceptional.

These steps are one of the oldest surviving landmarks in the city, so for that reason alone, it’s worth visiting them.

Looking for more Italian landmarks to add to your bucket list? Read my guide now.

The History of the Spanish Steps, Rome

I’m sure you’re dying to discover why the Italians would call the Spanish Steps in the middle of Rome, Italy, one of their most treasured landmarks.

Built between 1723 and 1725, Rome’s Spanish Steps are the vision of the designer and architect Francesco de Sanctis. The steps sit on a steep 29-metre slope that starts at the French Trinità dei Monti church and the Bourbon Spanish Embassy. The stairs lead down to the Piazza di Spagna and Holy See.

Since the early 1500s, a controversial debate about connecting the two areas had occurred. Until finally, around the 1580s, Pope Gregory XIII started looking into archival drawings of a staircase.

When French diplomat to the Holy See, Etienne Fueffier, died in 1660, he left 20,000 Italian Scudos to help construct the stairs. Unfortunately, construction ended abruptly when Etienne’s nephew contested his will and won half his fortune. Cheeky, indeed.

The pope at the time, Cardinal Jules Mazarin, died in 1661, so no further approval for the construction took place, further adding to the delay.

The project, however, roared back to life in 1717. Pope Clement XI revived interest in it and held a design competition. Architects Francesco de Sanctis and Alessandro Specchi won the competition, earning favour with the French in charge of the project. Finally, the steps were completed in 1726.

Where do the Spanish Steps Get Their Name From?

In simple terms, the Spanish Steps get their name from the Bourbon Spanish Embassy. The embassy connects to Rome’s Holy See in the Piazza di Spagna – or in English, the Spanish Square.

Another reason why they are called the Spanish Steps is because the Spanish Royal Family, known as the Spanish House of Bourbon, held occupancy in Italy in the 1600s.

How Many Steps Are There at the Spanish Steps?

The Spanish Steps feature a mix of curves, vistas, terraces, and straight flights. Builders used a combination of marble, plaster, and brick to construct them.

To preserve the steps, you can’t sit on them. This rule came into effect in 2019, with a fine of €250 for sitting on the steps. Authorities also give out fines of €400 to individuals who wilfully litter or damage the steps.

When to Visit the Spanish Steps

The best time to visit the Spanish Steps is in spring. This is when Rome starts warming up, and also when you’ll get to admire this iconic attraction at its best.

Rome’s residents decorate the steps with gorgeous pink Azaleas during this time, adding to its charm. It’s also pretty quiet during spring in Rome, as it’s the period just before peak season.

It’s best to visit early in the morning or later at night to avoid crowds. I would not advise you to visit during lunchtime, as this is when almost all tourists visit the steps. It’s improbable that you’ll get any good pictures without hoards of people disrupting your photos.

Points of Interest Around the Spanish Steps

Whether taking a walking tour or exploring the Spanish Steps yourself, why not stop at some of these nearby attractions?

I’m sure you’ll be happy to hear that Rome’s beloved Trevi Fountain is just one block north of the Spanish Steps. That’s a short 10-minute walk. Don’t forget to bring a coin to throw in the fountain and make a wish.

Tip: Book this Trevi Fountain and underground tour and discover the hidden secrets of the ancient City of Water that feeds into the fountain.

Piazza di Spagna sits directly below the Spanish Steps and is a popular place to meet up, take pictures, and plan your way around the area. Plus it’s got its own lovely little fountain called the Fontana della Barcaccia in the centre.

On the opposite end, you’ll find the Piazza della Trinità dei Monti at the top of the Spanish Steps.

You’ll also find the Trinità dei Monti church and one of the 13 ancient Roman Obelisks. This is also a great lookout point for breathtaking city views and is a great place to stop and rest your feet.

You’ll find some of Rome’s most iconic streets no more than a two- or three-minute walk from the Spanish Steps. These include Via dei Condotti and Via delle Carrozze.

These streets house some of Italy’s most luxurious brands, including Bulgari, Fendi, Prada, and Gucci. It’s a lovely place to stroll, even if you are just window shopping.

Planning Your Visit to The Spanish Steps

Good news; the Spanish Steps are free to visit, so you can visit them independently. If you’re exploring Rome on a hop-on-hop off bus tour, the bus will briefly stop at the Trevi Fountain, and you can get off and take the short walk to the steps.

You can take the metro and follow a self-guided audio tour if you prefer. The metro will take you along the A route, stopping at the Spagna Station, only a minute’s walk away from the steps.

Visiting the Spanish Steps on a Tour

A tour visit to the Spanish Steps often includes many of Rome’s other attractions. If you’re after something a little different, why not try this city centre guided walking tour in the evening?

The tour starts in the early evening with a knowledgeable local guide. Your guide will take you to the Spanish Steps, with stops at the Trevi Fountain, Piazza Navona, and more. You’ll also take in a stunning sunset at the Pincio Terrace.

Where to Stay for The Spanish Steps

It’s also near many metro and bus links, making it super easy to get to where you want to be. Apart from that, the hotel features a classic design with cosy rooms.

Just 300 metres from the Spanish Steps and Via Condotti, Hotel Fifty-Five is an excellent base for exploring most of Rome’s points of interest. This modern hotel features an ultra-cool design and has seven luxurious room types.

Tip: For more advice on where to stay in Rome, check out my guide on the best Airbnbs in Rome.

Alternatively, check all accommodation in Rome around the Spanish Steps on Booking.com 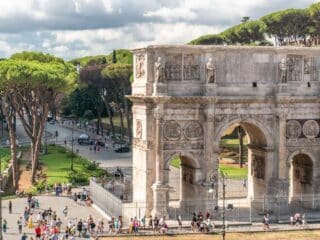 Previous
Where to Stay in Rome: The Best Areas + Hotels for Your Trip 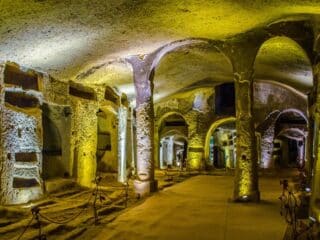 Next
Rome’s Catacombs: Exploring The Darker Side of The Eternal City