Rome’s Catacombs: Exploring The Darker Side of The Eternal City 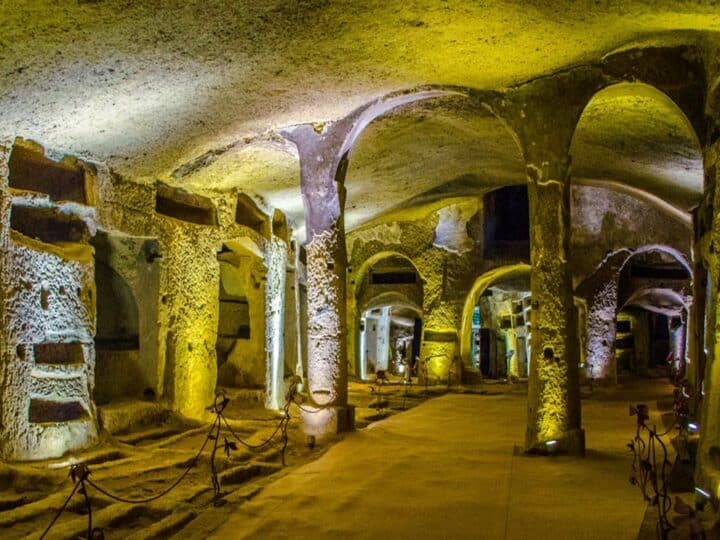 Rome’s catacombs are among the city’s most curious sights – a reminder of the darker side of the Eternal City. Here’s what you need to know.

Rome is a city of many faces – one steeped in art, history, and culture. But what about the dark side of the eternal city?

Not to dig up the past (OK, that’s exactly what I’m doing) but let’s dive into the history of Rome’s catacombs – one of the darker sides of the city.

Rome sits atop a vast network of these burial tunnels and exploring them should be on your Rome itinerary – no matter how short it is.

So, here’s what to expect when you visit the catacombs of Rome.

What Are Catacombs and Why Does Rome Have So Many of Them?

Why does Rome have so many catacombs? What are catacombs?

Okay, hold onto your explorer’s hats, folks. Class is in session.

First up, what even is a catacomb? In short, a catacomb is a collection of underground passageways or tunnels. These intersect at points and often stretch for quite a few kilometres.

That doesn’t sound creepy at all, right? Well, here’s the catch. Catacombs are not just empty passageways. No, my intrepid adventurers, they usually come lined with thousands of human remains.

Yes, catacombs are burial tunnels. In fact, these labyrinths – which are as spooky as you’d expect them to be – served quite the purpose back in the day.

A Brief History of Rome’s Catacombs

According to some archaeologists  (it’s still a bit of a guesstimation), there are about 60 catacombs underneath Rome. You see, sometime between the first and second centuries, Roman law prohibited the burial of the deceased within the city.

The Jewish and Christian communities faced significant persecution in Rome – particularly between the 1st century AD and 4th century AD. Living in communities distinct from the mainstream pagan society, they also buried their dead separately too.

Initially, only Jewish citizens used the tunnels, and then about a century later, Christians followed suit.

The catacombs offered a safe place to bury their dead without fear of displaying religious symbols upon tombs. Thousands of people found their eternal resting place within these mazes.

Then in 313, the persecution of Christians stopped with the signing of the Edict of Milan. This edict allowed for the building of churches and the designation of burial land. But, the use of catacombs persisted until the 5th century.

The barbarian invasion of Italy in the 8th century resulted in heavy looting and desecration of the catacombs. Subsequently, the use of catacombs stopped and most left abandoned with important relics moved to churches inside the city.

Now that you know the ins and outs of Rome’s catacombs let’s dive into the best ones you can visit.

Catacombs in Rome You Should Visit

It would be quite a scandal if I started this list with anything but the catacombs of Saint Callisto, also known as Saint Callixtus. Why, you might be asking? Well, it’s considered the most impressive and beautiful (I use the term loosely) in Rome.

Considered the first catacombs used by Christians, they stretch for an astounding 20 kilometres. Within, you’ll find the burial sites of 16 Popes alongside many Christian martyrs.

Two famous sites in the catacombs include the ‘crypt of the Popes’, which houses the sanctified remains of five deceased pontiffs. The other is the crypt of Santa Cecilia.

Top Tip: Book this guided tour of the catacombs of St Callixtus, or this tour that includes the Appian Way.

Originally called ‘Regina catacumbarum’, which translates to ‘the queen of catacombs’, this is where roughly 40 thousand burials took place. Amongst these, six Popes and hundreds of martyrs fill its niches.

Inside there are numerous important sites you can visit. The Cubicle of the Velata depicts redemption scenes from the Old Testament. The Greek Chapel showcases frescoes of “franctio panis”, or the sacrament of breaking bread. And what some deem the most ancient depiction of the Virgin Mary and the baby Jesus.

Explore the catacombs of Santa Priscilla, which are open from Tuesday to Sunday. You can choose to go between 9 am and 12 pm or 2 pm and 5 pm.

While many other Rome catacombs brim with the history of popes and martyrs, the catacombs of Domitilla tell a different story. Commissioned by the Domitilla family, they span nearly 15 kilometres.

These catacombs are the oldest of Rome’s underground burial tunnels, which is why they have seen significant restorations. Inside, the stunning frescoes offer depictions of Christ, while many others display more Christian art.

Fun fact time. Some of the niches carved into the passageways still contain bones. But, large parts of the catacombs are still closed to the public.

Top Tip: Book this small group Roman Catacombs tour to delve into the history of Domitilla.

Catacombs are fascinating, but they are also (unsurprisingly) sombre. The catacombs of Sant’ Agnese are exceptionally so. Agnes, a young girl of 12, died due to Christian persecution.

While these Roman catacombs do not contain much in the way of artistic frescoes or paintings, it is worth a visit. Inside the three-tier catacombs, you can see many epigraphical testimonies etched into its walls.

These tell tales of countless visitors to the tomb who came to view one of the first burial catacombs dedicated to a woman. The legend of Saint Agnese is why some call it one of the most famous catacombs in Rome.

Top Tip: You can only visit the catacombs of Sant’ Agnese by booking a guided tour through the official website. Visit their website to book your tickets.

From an artistic perspective, the catacombs of Praetextatus are the most renowned tunnel network in Rome. It’s also one of the few in the city where depictions of not just Christian symbols mark the walls.

The interior features a few distinct areas as well. First is the Cubicle of Coronatio, which depicts the crowning of Jesus with thorns and the resurrection of Lazarus. Beyond that, it holds the sarcophagus of Emperor Balbino, as well as illustrations of the myth of Achilles.

Top Tip: Choose this guided half-day tour of the catacombs of Rome, which includes significant basilicas, to explore the eternal city’s underground.

Dedicated to Saint Sebastian, these are the first burial tunnels called catacombs. Persecuted by the Roman Emperor Diocletian for converting thousands of soldiers to Christianity, his remains reside here.

The catacombs also contain a marble statue of St Sebastian and several sacred relics. These include the arrows that pierced his body and the column on which he died.

Top Tip: To view these burial tunnels, book this 3-hour guided tour of the best catacombs in Rome.

Practical Tips for Planning Your Visit to Rome’s Catacombs

If you’re planning to visit any of the catacombs in Rome independently, there are a few things to remember. Most importantly, you can only enter them as part of a guided tour.

While there are numerous tour operators, each catacomb has its own tour system.

These tours led by monks or priests often involve a sermon. You must also dress appropriately, as the catacombs are holy sites.

Visiting Rome’s Catacombs On a Tour

On the other hand, adding a tour, or tours of Rome catacombs through a tour operator, is a more encompassing experience. These often include more than one catacomb and other areas of interest.

Hosted tours also are led by well-trained guides whose knowledge enhances your overall tour quality. These are, however, often more costly but worth it if pressed for time. 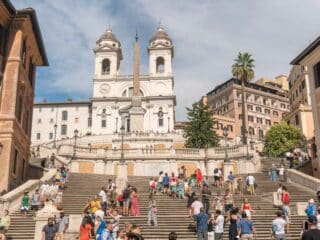 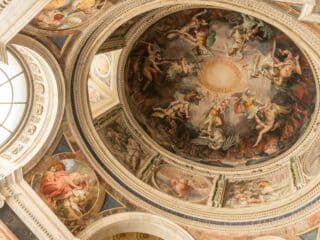 Next
20 Brilliant Day Trips from Rome