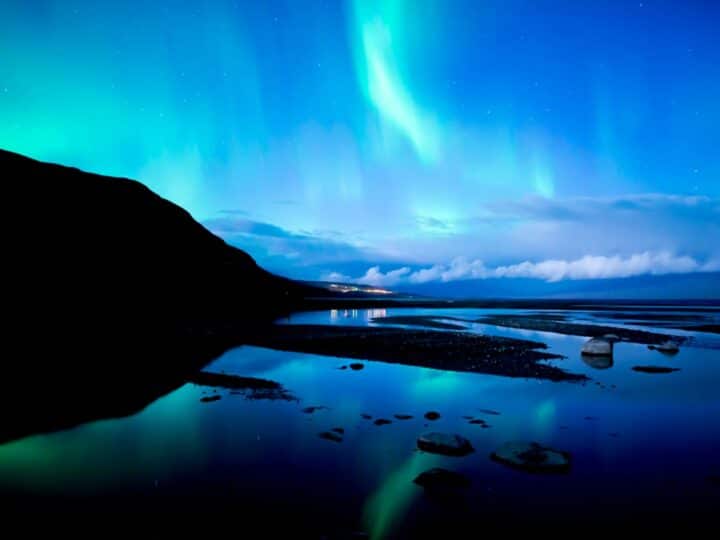 The Aurora Borealis is a mind-blowing phenomenon that very few people are lucky enough to witness in their lifetime. But when and where should you see the Northern Lights in Sweden?

Oh, the Northern Lights. The swoonworthy light show is a bucket list event for many.

Travellers often overlook Sweden as a spot to view this incredible natural event in favour of Norway, Iceland and Finland (I don’t blame them, to be honest). But, have no fear, I’ll be taking you through the best time to see the Northern Lights in Sweden and where exactly you can see them.

When Is the Best Time to See the Northern Lights in Sweden: At a Glance

Briefly, the best time to see the Northern Lights in Sweden specifically is from late September to early March.

What Are the Northern Lights?

Loads of people have heard about the Northern Lights…

…But what are they? Scientifically, it’s called the Aurora Borealis. The brightly coloured, vibrant lights that we see are a result of Solar Energetic Particles from the sun colliding with oxygen and nitrogen molecules in the earth’s atmosphere.

And then – boom – the result is the Northern Lights. Thank you, mother nature.

Can You See the Northern Lights in Sweden?

The short answer is – yes, you absolutely can. The Swedish Lapland area in the north of the country sits in the “Northern Lights Belt,” which is one of the best places to view this spectacle.

The Aurora Borealis can be seen in Sweden and other Nordic areas, such as Rovaniemi in Finland or Tromso in Norway. So this affects when you’ll be able to see the Northern Lights.

As I’ve mentioned, September through March are the best months to see the Northern Lights. The skies get darker, and the winter nights get longer, giving you a better chance of spotting the lights.

Overall, March is the best month to go and see the Swedish Northern Lights. The heart of winter has passed by then, so less snow and clouds make the lights more visible. March is also one of the months when solar activity is strongest, making the displays more intense.

Plus, there are fewer tourists in Sweden around this time – bonus.

Where to See the Northern Lights in Sweden: Best Places

So now that we know when you should see this impressive display, the burning question remains – where can you see the Northern Lights around Sweden?

Kiruna is the northernmost town in the Swedish Lapland region. In fact, you couldn’t get further from the capital, Stockholm, because Kiruna is a good 12-hour train ride from there (quite a trek on European soil).

If you’re keen on learning more about the Northern Lights, 24 miles outside the city sits the Esrange Space Centre. This is a major institutional hub focusing on the lights and understanding them better.

Right in the heart of Swedish Lapland lies the Abisko National Park. Sitting 60 miles away from Kiruna, this place is your best shot of spotting the lights. It receives very little precipitation, so there are usually clear skies, which is good news, especially in the winter months.

And, as a bonus, it’s home to the world-famous Aurora Sky Station. This impressive observation tower provides the best vantage point to marvel at the lights and the incredible alpine mountains around it.

A chairlift will take you to the top, where you’ll find the tower and a restaurant. Imagine having the best Nordic cuisine with the Northern Lights dancing around you—more than enough reason to travel to Sweden to see the lights than anywhere else.

Jukkarsjärvi is a small town, only 20 minutes away from Kiruna. It’s got a little over 500 inhabitants, so if you’re looking for a place to see the lights with minimal people, this is the place for you.

While there, be sure to book a stay or visit the popular ICEHOTEL, which features rooms cut from blocks of ice. As well as seeing the Northern Lights, you can visit a camp of Sweden’s indigenous people, the Sami, and enjoy a dog-sled ride.

A small village in Sweden’s north Arctic region, Porjus is right in the heart of the Laponia UNESCO World Heritage Site. With a little over 400 people living here, it’s far away from any crowds and light pollution – perfect for seeing the lights under clear skies.

It’s near the Muddus and Stora Sjofallet national parks, and is surrounded by lakes, mountains, and waterfalls. You’ll be able to snap fantastic pictures of the Northern Lights with these landscapes in the background.

What sets it apart from other areas in Sweden is it has live webcams in the town, so everyone knows exactly when the lights will appear.

Swedish Lapland is home to numerous small towns that make it one of the best places in Sweden for Northern Lights viewing. Jokkmokk is another one of those towns.

This quaint town is also home to the Sami people who’ve lived here for centuries. Each year in February, they host a 400-year-old market selling traditional food and other things.

And, if you plan your visit right, you can enjoy the Sami Market and the Northern Lights in one trip.

Luleå is a picturesque coastal city in Lapland in northern Sweden surrounded by 1,300 islands. As opposed to neighbouring towns that offer views of mountains and lakes as backdrops for the Northern Lights, here you’ll find the sea.

It’s pretty special to watch the Northern Lights as they dance around the waves of the sea with Luleå’s idyllic landscape. Also, check out the Nederluleå Church, which has been around since the 1400s and is still in perfect condition.

How to Plan Your Swedish Lapland Northern Lights Visit

Although guides can’t always guarantee that you’ll see the lights, a Northern Lights tour is still worth booking. Why? Well, simply because it’s easier than trying to visit the right spots to find the lights by yourself.

The tour guides will do their best to locate the best spots to ensure you see the Northern Lights. Along the way, you’ll also learn more about them and the history of the Lapland area. You’d miss out on some key information if you tried to do this on your own.

Stay at a Northern Lights Hotel

The benefit of staying in a Northern Lights hotel is that they usually offer a special wake-up call during the night when the lights show up. It’s good to use this service instead of roughing it and pulling an all-nighter only to miss the lights.

Tip: Book a stay at the Camp Ripan Hotel in Kiruna.

The My Aurora Forecast and Aurora Forecast 3D apps are excellent tools. They track the lights from anywhere in the world in real-time and give relatively accurate predictions as to when you can see the lights.

Northern Lights in Sweden: Read Next 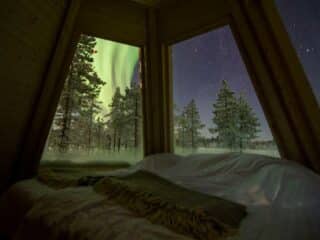 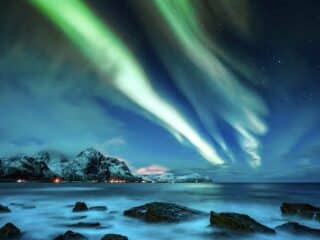