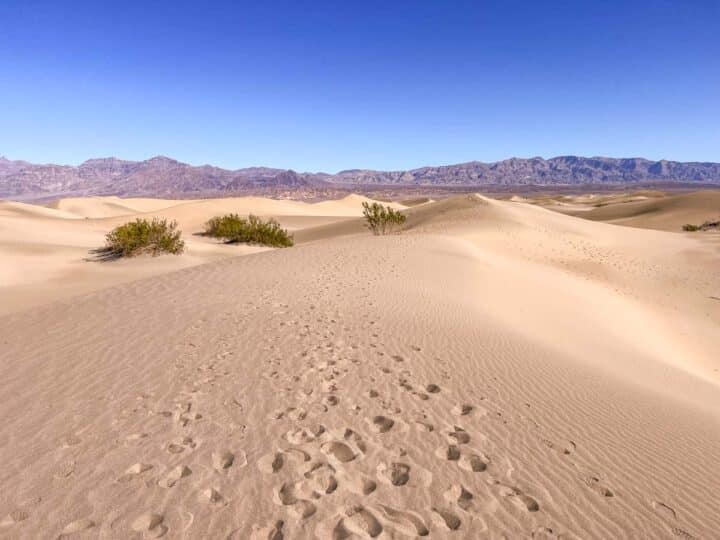 Heard of the Death Valley sand dunes? Here’s why you need to visit this incredible natural phenomena.

The idea of visiting “Death Valley” might not sound too enticing, but there’s one major reason why you should visit the Death Valley National Park – the epic Mesquite Flat Sand Dunes.

Death Valley is an absolute must on any California road trip, and there’s no better introduction to the area than the Mesquite Flat Sand Dunes. Stick around to find out why.

I won’t lie to you; there are other sand dunes in Death Valley National Park that you could visit (four to be exact). So you might be thinking: what makes the Mesquite Flat dunes unique?

Well, lots of things, actually. The main reason to visit these dunes is the dramatic shadow display at sunrise and sunset. As the sun rises or sets, a spectacular display of colour with long shadows and soft light highlights the ripples that run through the sand in greater contrast.

At night, the area completely transforms once again – I was left speechless on a recent trip (quite the feat).

The Death Valley National Park is one of the few dark sky reserves in the U.S. This means you’ll be able to look up into the clearest night sky without any light pollution and I highly recommend sticking around for this after you’ve watched the sunset…

…Just beware of the rattlesnakes in the summer.

Speaking of snakes, if you’re into exotic animals, then this is one place you want to visit. This unlikely environment is home to various rare animals, including sidewinder rattlesnakes and nocturnal kangaroo rats (surprisingly adorable).

And last but not least, the Mesquite Sand Dunes in Death Valley allow you to sandboard down the dunes. And what could be more fun than that?

While tricky to master – I’ve not quite managed to get the hang of it yet – it’s one of the coolest things to do in California. I recommend giving it a go.

The Mesquite dune field contains three types of dunes: linear, crescent, and star-shaped, which you won’t find in other areas of the park.

Secondly, its location is perfect for creating dunes that last. The Mesquite dunes sit between two large mountains in the centre of Death Valley near the Stovepipe Wells.

Strong winds sweeping through the area create the perfect conditions for the sand to move and create dune fields with ripples in them. The mountains on each side prevent the wind from completely blowing the sand away, et voilà – the result is the Mesquite Flat Sand Dunes.

Spoiler alert! If you didn’t already know, it gets hot. And I mean really hot. The highest recorded temperature in the Death Valley dunes was 134°F (56°C) in 1913.

While it doesn’t get as hot as that these days, Death Valley still claims the title of the hottest place in America, so naturally, I would not recommend visiting in summer.

The best times to visit would be November to May, when the temperatures are significantly lower, and it’s less crowded.

As it’s a natural landmark, the Death Valley dunes are open 24 hours. If you’re visiting during the summer (don’t!), make sure you avoid midday as this is when it will be hottest.

If you’re planning on visiting the Mesquite Flats independently on a self-guided tour (this is what I did), it’s pretty simple. The Death Valley National Park is 2-miles from the StovePipe Wells Village, just off Highway 190.

From there, you’ll find a small parking lot which marks the start of the 30-minute trek up to the dunes. There isn’t an official trail to follow, but it’s easy to find – the highest point rises 100-metres above the desert floor.

If self-exploration and roughing it out isn’t for you, consider taking a guided day tour.

Apart from the Mesquite Flats, you’ll get to see other iconic Death Valley attractions, such as the Area 51 Center.  If you’re short on time, this is an epic way to pack in a lot of things in one day.

Where to Stay for Mesquite Flat Sand Dunes: The Ranch at Death Valley

If you’re looking for somewhere cool (in style, certainly not temperature) to stay, look no further. The Ranch sits within the Death Valley National Park, making it the perfect base for exploring the dunes.

It offers super-stylish and modern accommodations with a massive swimming pool – which is much welcome in the scorching California sun.

What to Pack for Mesquite Flats 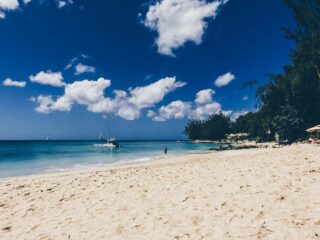 Previous
Where to Stay in Barbados: The Best Areas + Hotels For Your Trip 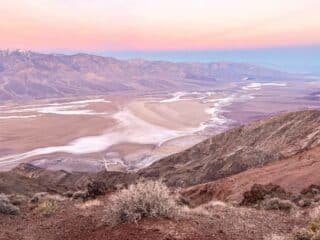 Next
20 Incredible Things to do in Death Valley National Park