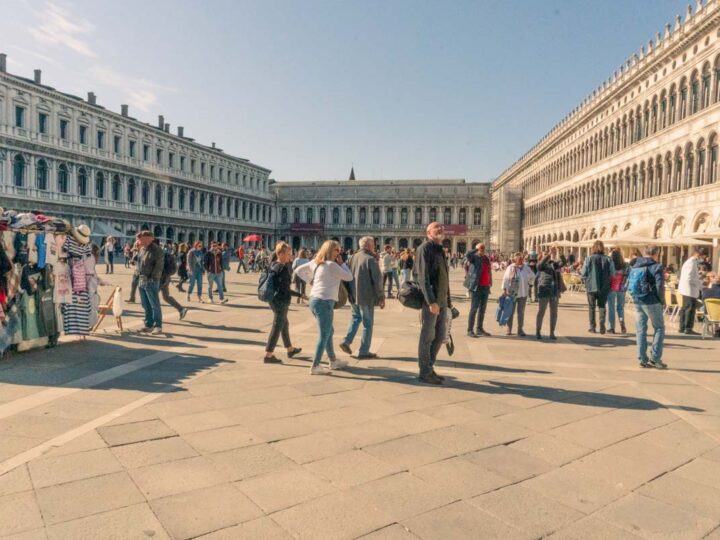 St Mark’s Square (or the Piazza San Marco) sits at the heart of Venice. Discover the must-visit sights, restaurants and tips for exploring with this insider’s guide.

St Mark’s Square is undoubtedly one of the most beautiful places in Venice.

A piazza located in the heart of the city, it is home to some of Venice’s most famous landmarks, including Saint Mark’s Basilica and the Clock Tower.  Planning a visit?  These are the things you shouldn’t miss.

Unmissable Things to do in St Mark’s Square, Venice

St Mark’s Basilica is one of the most iconic and famous sights in Venice. Quite fitting seeing as it’s dedicated to Saint Mark, the city’s patron saint.

This beautiful Byzantine church is a must-see when visiting the piazza – but did you know that it’s not the first version of the church that has stood on this site?

The first church on the site was built in the late ninth century, but it was destroyed by a fire in 978. The current basilica was built between 100 years later and was consecrated in 1024.

The exterior of the church is decorated with a number of beautiful Byzantine mosaics, not to mention the rather imposing statue of St Mark surrounded by four golden horses.

The interior of the church is equally stunning and features a number of impressive religious paintings and sculptures, frescoes and mosaics.

Venture inside you’ll find the famous The Last Judgment mosaic. It covers the entire wall behind the altar and shows Jesus Christ seated on a rainbow-colored throne, surrounded by angels and saints.

How to Visit: To visit St Mark’s Basilica, you’ll need to purchase a ticket (which includes entry to the Doge’s Palace too).

The Clock Tower, also known as the Torre dell’Orologio, is another of the Piazza San Marco’s – and Venice’s – most famous landmarks.

Best-known for its intricate carvings and marble facade, it was built in the 15th century and is one of the oldest working clocks in the world. In fact, the clock tower was commissioned by the Venetian Senate in 1496 to celebrate the rebuilding of the city after a series of devastating fires.

Think you’ve seen something similar on St Mark’s Square already? It was designed by architect Mauro Codussi, who also designed the Doge’s Palace.

The tower is 47.50 meters high and features a carillon with 49 bells. The bells are played three times a day – at midday, at the beginning of evening, and at the end of evening.

The tower is home to two bronze statues, which represent the Moors who originally built the clock. They strike a bell with their mallets every hour on the hour,  it’s quite a sight to see!

How to Visit: Tickets for the clock tower cost €12 per adult. It’s definitely worth a climb for some great views of the piazza and Venice’s rooftops.

The Doge’s Palace is another must-see in St Mark’s Square. This Venetian Gothic palace was the residence of the doges (the rulers of Venice) for centuries.

It’s also home to a number of museums, including the Venice Museum of History and the Costume Gallery.

The Campanile is a tower located on Venice’s St Mark’s Square. It was built in the 11th century and is now one of the city’s most popular tourist attractions.

The Campanile is now a popular tourist attraction and, at 98 metres high, offers some great views over Venice.

Did you notice that the three flagpoles in front of the St Mark’s Basilica are genuine ship’s masts?

They commemorate the three kingdoms that Venice annexed: Cyprus, Crete, and the Peloponnese.

The flagpoles weren’t always welcome in Venice: in fact, they were seen as a symbol of tyranny during the Napoleonic era, and their destruction was threatened. It was claimed they represented Freedom, Virtue, and Equality to save them.

The Museo Correr is a museum located on the Piazza San Marco. It was founded in 1836 and is home to a number of historical artefacts from Venice and the Veneto region.

The museum is home to a number of interesting exhibits, including Napoleon’s carriage, as well as artworks by Titian, Tintoretto and Veronese.

No visit to Venice is complete without sampling some of its delicious gelato! There are a number of great places to get your fix in St Mark’s Square, including Venchi, Gelateria Alberto Ponte, and Gelateria La Sorbetteria Castello.

After exploring the sights of St Mark’s Square, take a break and enjoy a cup of coffee at one of its charming cafes. Some of our favourites include Caffè Florian, Grom Gelato, and Venice Coffee.

Founded in 1720, Caffè Florian is one of Venice’s oldest cafes. It’s located in the courtyard of the Doge’s Palace and is a popular spot for tourists and locals alike.

The cafe has a beautiful interior, with ornate ceilings and marble floors, and is often described as one of the most beautiful cafes in the world.

The Osteria San Marco is a Venetian restaurant located in a 16th-century building on St Mark’s Square. It offers traditional Venetian cuisine, as well as wine and beer from the Veneto region.

The restaurant has a cosy and intimate atmosphere, and is popular with tourists and locals alike.

Prices start at €30 per person.

The Bacaro Da Fiore is a Venetian wine bar located in a 16th century building on St Mark’s Square. It offers an extensive wine list, as well as Venetian cuisine and snacks.

The bar has a cosy and intimate atmosphere, and is popular with tourists and locals alike.

Gelateria La Sorbetteria Castello is a gelato shop located in a 16th century building on St Mark’s Square. It offers an extensive range of flavours, as well as coffee, pastries, and sandwiches.

The gelato shop has a cosy and intimate atmosphere, and is popular with tourists and locals alike.

The Hotel Monaco & Grand Canal is a 5* hotel located in a 16th century palazzo on St Mark’s Square. It offers beautiful views over the square and the Grand Canal, and features luxurious accommodation and amenities.

The Hotel Danieli is a luxury hotel located on the banks of the Grand Canal. It offers stunning views over Venice, as well as luxurious accommodation and amenities.

The Hotel Ai Reali is a charming hotel located in a 16th-century building on St Mark’s Square. It offers beautiful views over the square and features accommodation and amenities that range from basic to luxurious.

There’s no doubt that St Mark’s Square is one of the most beautiful and iconic squares in Venice – and indeed, the world! With its stunning architecture, fascinating history, and delicious gelato, it’s a must-visit for any visitor to Venice.

So what are you waiting for? 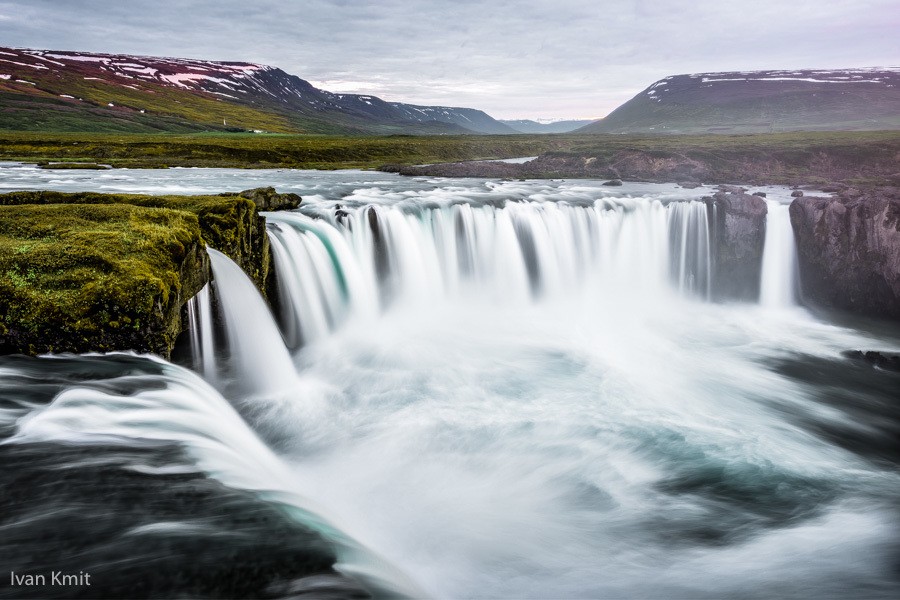 Previous
21 Spectacular Iceland Waterfalls You Need to See: Complete with a Handy Map 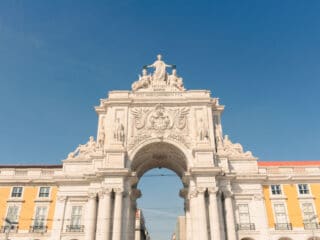 Next
Cool Things to do in Lisbon: A City Break Guide